The complete lightning protection for sailing yachts and motor boats. The core of our lightning protection is the DDCE inhibitor system from Dinnteco. This innovative system protects your yacht against direct lightning strikes. In addition we offer further protection against indirect strikes from the water and for the shore connection.

The manufacturer Dinnteco has been installing this technology on buildings, sensitive industrial plants, historical facilities and any buildings that need to be protected from lightning for more than 20 years. More than 8.000 units has been installed.

In the past the marine market was not the focus of attention which is now reflected by the extra developed Marine DDCE. The system was developed explicitly for the requirements and rough conditions at sea

Holger Flindt, Head of Claims Department of Pantaenius (Europe’s leading specialist for yacht insurance) is convinced of the DDCE System:
“Damage caused by lightning is increasing. In recent years the number corresponding events at Pantaenius tripled. Although the effects of a direct or indirect lightning strike can vary greatly, they often mean considerable danger for man and material. Even days after an unnoticed lightning strike it happens that boats suddenly sink at the pier. Whether and how a boat survives a thunderstorm is not only a question of luck. A properly installed lightning protection system such as the DDCE system protects people and material.

The DDCE system is therefore supported by us and a compliant protective measure for us.
And it also exempts the customer from an excess in the event of a lightning strike in particularly endangered shipping areas.

The innovative DDCE lightning protection system prevents the forming of lightning strikes in the protected area. The system is approved on land since many years with amazing results. The Marine DDCE is explicitly designed for the requirements and harsh conditions at sea.

During a thunderstorm, a potential difference is created between the clouds, which are usually negatively charged in a thunderstorm, and the positively charged earth. At certain points, this can lead to an increase in charge concentrations. In these strong electrical voltage fields between clouds and earth, lightning finally discharges. In the process, negative charge carriers first migrate towards the ground in the so-called conductive lightning and prepare an ionised channel through which the current can finally flow. At the same time, the ground under the thunderstorm becomes positively charged. At exposed locations such as church steeples – or the masts of sailing yachts or equipment carriers of motor yachts – the electric field is particularly large. From such places, a positive charge – also called an upward streamer – can go towards the leading lightning and closes the lightning channel so that the main discharge can follow. This usually consists of several individual discharges and can reach a current strength of 100,000 amperes.

The DDCE (Electromagnetic Charge Compensation Device) is a System of Protection against Atmospheric Discharges and an Electromagnetic Protector that avoids the impact of the lightning strike on the protected structure by 98%. 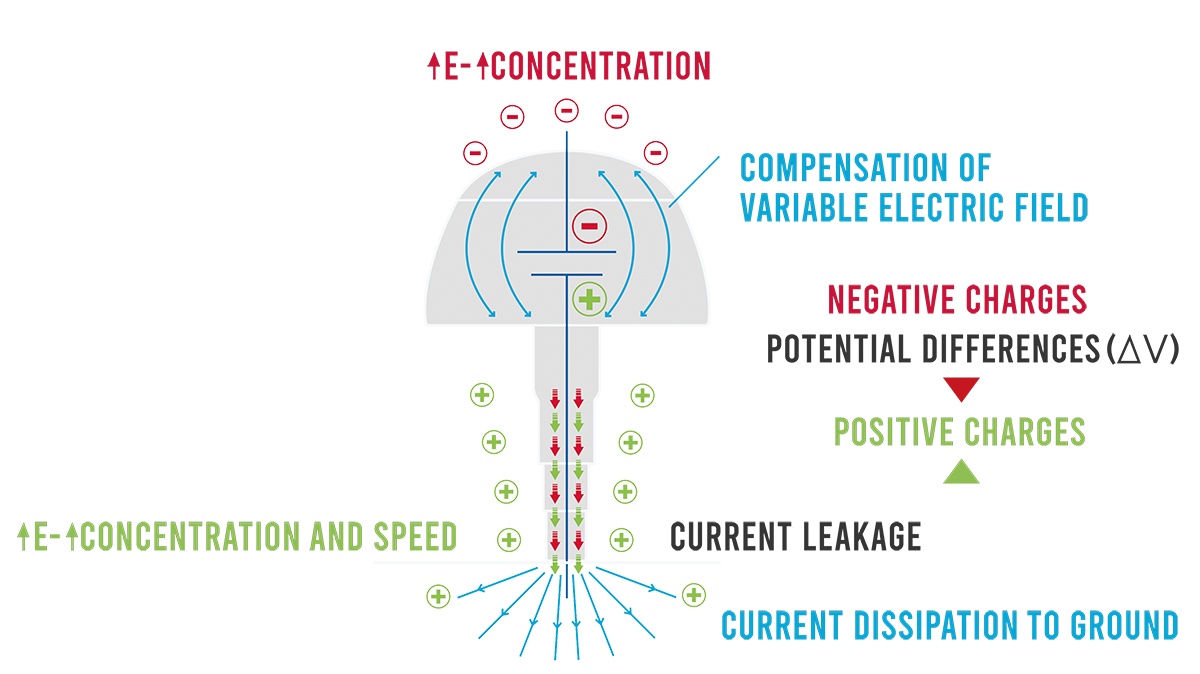 How does the DDCE work?

The DDCE system from Dinnteco provides potential equalisation so that in the protected area no lightning will be formed. The DDCE attracts excess negative charges from the air layer, compensate and drain it through the grounding. This process eliminates positively charged upward streamer from the protected structrure and thus prevents the formation of a flash channel or stepped leader and avoid the main discharge (lightning strike) into the yacht.

By varying the electric field in its environment a leakage current is generated whic will be drained to ground. The DDCE is a passive device and needs only a sufficient grounding and no power supply.

For the eventuality that the lightning strike will hit the water outside the protected area, a sufficient protection against electromagnetic impulses (EMP) is recommended.

A lightning flash generates an electromagnetic field which induces over-voltages of significant magnitudes on structures in the vicinity. For the electronic equipment are these EMP’s just as dangerous as direct strikes. The harmful EMP can move hundreds of meters and enters the inside of the boat through conductive parts in the hull.

To protect the electronic equipment from EMP’s we recommend to install  a DINFIL ground filter which reduces the high frequencies. The remaining low frequencies will be discharged to ground by a Surge protector (SPD).

The third step to a complete lightning protection is the security against indirect lightning strikes from the harbour over the shore power connection. We provide you with the suitable protection according your needs.

For any questions, callback requests or request for quotation please use the adjacent contact form. We are looking forward to hearing from you!

Ideal communication solutions for a fast rescue in emergency situations.

Effective protection by Marinelec and Autronica for vessels of all sizes.

Wiper systems and components for marine applications by Hepworth & Wynn